On 1 August, the world’s largest plug-in hybrid vessel, COLOR HYBRID, was delivered from Ulstein Verft to Color Line. With all its innovative and new environmentally friendly solutions, the ship is an important milestone project for both Ulstein, Color Line and the suppliers.

Over 70% of the suppliers are from the maritime cluster in Norway.

COLOR HYBRID introduces new solutions to reduce noise and emissions.  The vessel is a plug-in hybrid, where the five-megawatt batteries can be charged with environmentally friendly power from shore power in Sandefjord. The vessel will go silently in and out of the fjord of Sandefjord, without emissions. With a battery pack of 4.7 MWh, the ‘COLOR HYBRID is able to travel 12 nautical miles only on battery power.

The battery pack weighs 65 tons and can be recharged in one hour. The ship also has a heat reservoir of five megawatts which utilizes heat from both the wake and the exhaust for heating. This, together with an optimal hull construction, helps to make the vessel energy efficient and environmentally friendly.

As from 16 August she will operate on Sandefjord (Norway) – Strømstad (Sweden). The crossing time is 2h30.

Remark: Recently Fincantieri redelivered the Grimaldi ferries CRUISE ROMA and CRUISE BARCELONA after lengthening. They have been equipped with large Corvus battery packs (5.5MWh), which are being charged at sea, and used in port for a better environment for the locals.

These two Italian ships can probably claim the title of ‘largest battery packs on a ferry’. The two ferries are also huge, with a gross tonnage of 63,000 and a length of 254m.

The Port Authority of Santorini decided to impose sanctions to the damaged ro-pax OLYMPUS of Sea Speed ​​Ferries.

These sanctions came as a result of the inspection carried out – on August 2, 2019 – which identified significant deficiencies in the area of ​​the SOLAS, LOAD LINES, MLC 2006, MARPOL & ISM CODE.

On the morning of 1 August, OLYMPUS hit the reef called Skala Panagias, which lies between Thirassia and Aspronisi, resulting in a few meters crack in her double bottom. On the same day, a floating barrier was installed around her, as well as two absorbent pads.

However, fuel contaminants and slag were found inside the dam, resulting in the installation of a second dam.

On 3 August, the tug CHRISTOS XXVIII of the Spanopoulos Group arrived in Santorini, in order to remove the vessel. But there are some temporary repairs in progress that have to be completed first. The ship is still moored on the spot.

Scandlines Is Planning Next Steps For Emission-Free Ferry Traffic

Scandlines Is Planning Next Steps For Emission-Free Ferry Traffic

“Full battery operation on Puttgarden-Rødby is possible if the ports can be efficiently connected to the power grid, and if the electricity becomes cheaper,” said Scandlines CEO Søren Poulsgaard Jensen to Dr. Bernd Buchholz, Minister of Economy, Transport, Labor, Technology and Tourism of Schleswig-Holstein.

“We plan to upgrade two more main engines from our ferries and replace them with battery packs that are loaded with land-based electricity during the less than 15-minute port time. But for this purpose, the capacity of the power grid in the port of Puttgarden must first be extended by an additional ten-kilometer cable from the center of the island of Fehmarn, and an on-site energy storage system must be built. Due to the currently high price difference between power produced onboard and the electricity purchased from the grid, the running costs are currently too high and thus not competitive. Therefore, we welcome the current efforts of the federal government to reduce the EEG surcharge for shore power as a first step,” said Søren Poulsgaard Jensen.

For the conversion of the ferries and the shore-side infrastructure Scandlines expects investments of approximately 100 million euros. 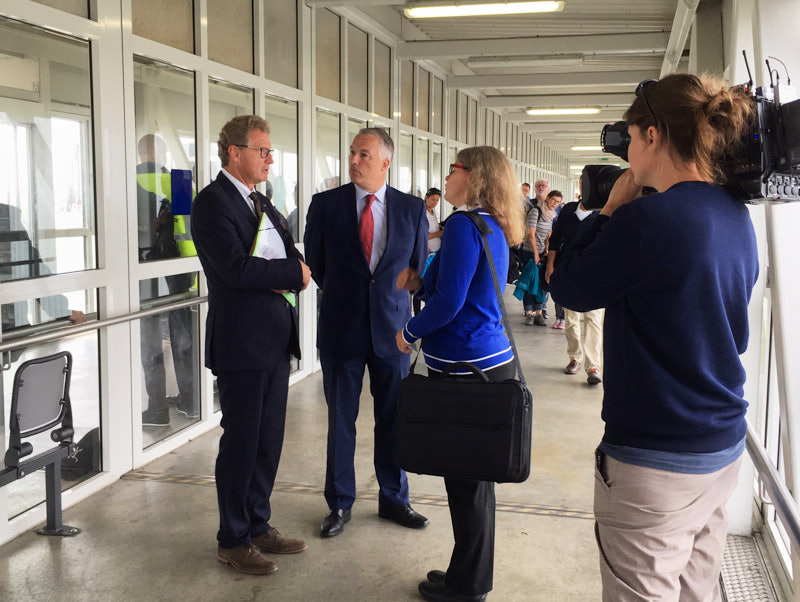 Tallink Grupp has launched an international name search for its new shuttle vessel, the construction of which is due to kick off at the Rauma shipyard in Finland early next year (2020).

The shuttle vessel, which will be similar to the group’s newest vessel Megastar, operating on the Tallinn-Helsinki route since January 2017, will be completed by the end of 2021 and delivered to Tallink Grupp in January 2022. The new vessel will then start operating on the Tallinn-Helsinki route, providing conveniently frequent departures between the twin capitals of Estonia and Finland.

Names for the new vessel can be proposed by filling in a form on Tallink Grupp’s website www.tallink.com/competition . The competition is open for entries until 31 August 2019 and the winning name will be selected by the company’s Management Board by the end of September this year. 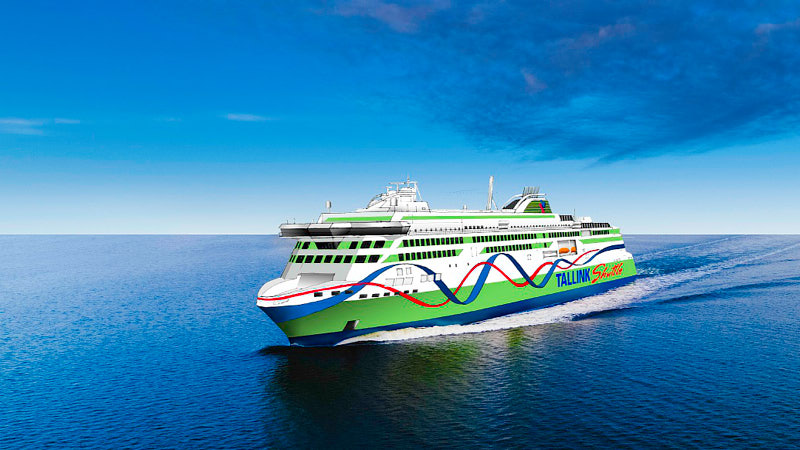 “Finnlines’ vessels are an eco-friendly choice for passengers,” says the company, now that shipping is coming under attack in the media.

Passenger-specific carbon-dioxide figures for 2018 have been calculated on Finnlines’ passenger routes, Naantali–Kapellskär, Malmö–Travemünde and Helsinki–Travemünde. The figures will be updated on a yearly basis and this will be the base for future calculations.

In 2018, CO2 emissions per passenger on routes:

Differences are due to passenger numbers and, for example, weather conditions and route choices. 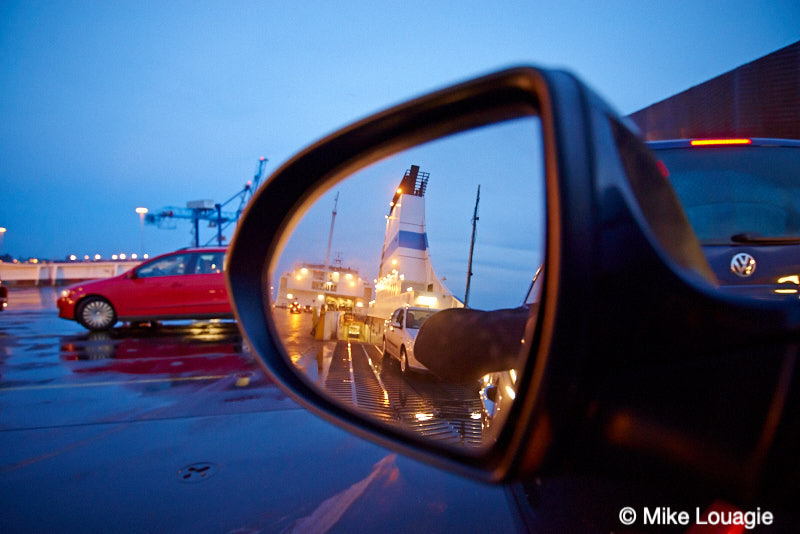 The Group’s revenue and operating result were impacted by the following operational factors:

During the first 6 months of 2019 the Group carried 1.2% less passengers and saw a decrease of 1% of revenue.

The financial result of the first 6 months of 2019 was impacted by the planned dockings of seven ships in Q1.

July Was A Record Month For Wasaline

July Was A Record Month For Wasaline

The strategy of adding more departures for the summer season has proven a success.

The total number of passengers in July was 46,073 which is an increase with almost 2,000 passengers.

As a result of above figures,  the overall turnover has grown with 7,1% compared to July last year.

Viking Line’s passenger volume for all routes in July was 951,645 passengers. This volume is even higher than that during the company’s record year, 2018, when 951,005 people sailed on its vessels.

MARIELLA and GABRIELLA, which sail between Helsinki and Stockholm, made day cruises to Tallinn. This increased capacity significantly.

“We see that there is a great interest in spending the holiday in neighbouring countries among our travellers, which reflects the social trend right now,” says Viking Line’s President and CEO, Jan Hanses.

The Italian Transport Minister officially communicated that, together with several Regions and the Coast Guard, some EUR 250 million have been allocated for the renovation of the ferries deployed on the short sea shipping routes in the period 2020 – 2030.

Those financial incentives are mainly focused on vessels operating local or regional links and are aimed at making access and maritime transport easier for people with low mobility.

The Transport Minister also specified that these resources are in excess of the EUR 250 million already allocated last year from the former government and also dedicated to new projects of small ferries to be built.

Venice-based ACTV, Palermo-based Siremar and all the operators active in the Gulf of Naples (Alilauro, Navigazione Libera del Golfo, Medmar, Snav, etc.) are among the companies interested in ordering new ships.