Almost 400 passengers have been evacuated from fast ferry PINAR DEL RIO after the vessel ran aground near the Port of Denia in the late evening hours of August 16.

ABEL MATUTES Is Balearia’s Second Ferry To Get LNG Power

The conversion of ABEL MATUTES into an LNG-powered ferry has reached one of the key phases of the process: the incorporation of two gas tanks of 178m3.

By 2021, Balearia wants to have nine of its ships to run on LNG.

ABEL MATUTES comes after NAPOLES, and will be followed by MARTIN I SOLER, BAHAMA MAMA, SICILIA and HEDY LAMARR (the former VISEMAR ONE).

Baleària’s first of two LNG-dual fuel ro-pax ferries left the shipyard Cantiere Navale Visentini and is now in dry dock at the port of Trieste for the final works before the final sea trials scheduled for the next weeks.

The newbuilding hull n° C224 and already named HYPATIA DE ALEJANDRIA is set to be delivered to the Spanish ferry company Baleària Eurolineas Maritimas SA in the first two months of 2019.

The second unit hull n° C225, which is a sister ship and will be renamed MARIE CURIE, is expected to follow some months later, with delivery date mid 2019.

These new ferries will have a capacity of 2,100 freight lane meters, 810 passengers and 150 cars each.

Baleària ordered the two sister vessels back in January 2017 for €200 million and both will be deployed on the Balearic Islands’ routes. 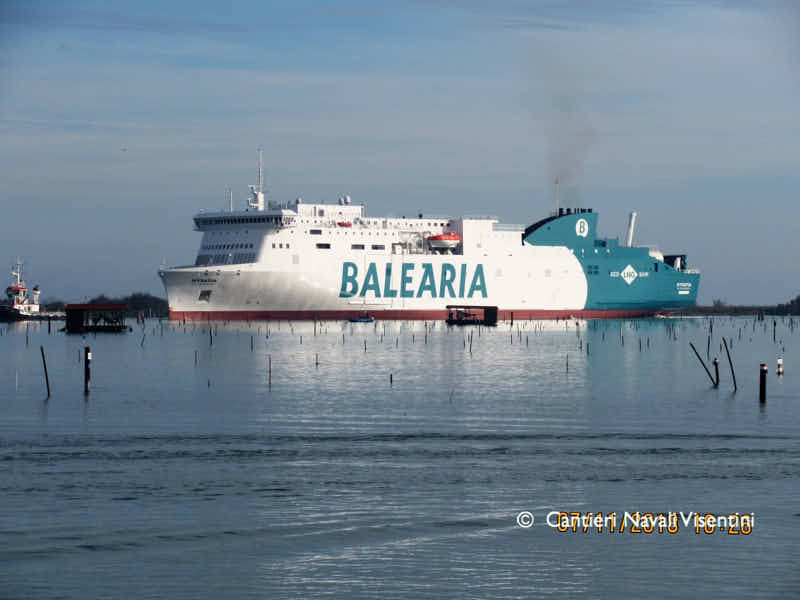 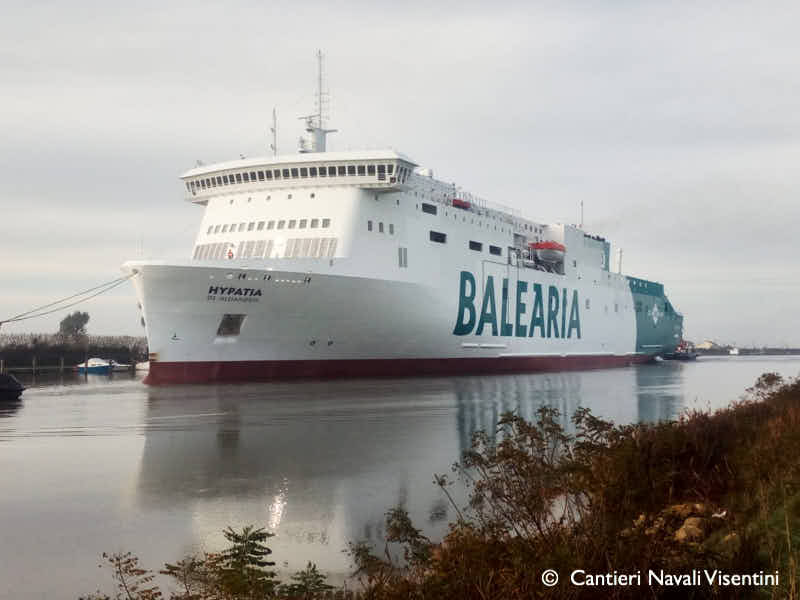 Balearia is prepared to wait for La Naval’s resurrection

Deia writes that Balearia did not cancel the contract with LaNaval for a 1+1 newbuilding order, after the yard went bankrupt. The order is now frozen pending talks with investors.

The president of Balearia, Adolfo Utor, was at the International Tourism Fair of Madrid (FITUR) to present the two LNG ro-pax ferries currently being built by Visentini.
The first vessel, the HYPATIA DE ALEJANDRÍA is expected to enter service in early 2019. The second will be named MARIE CURIE. The names are a tribute to two scientific women which are important in the history of humanity.
Both vessels are earmarked for the Balearic Islands.
Capacity: 810 passengers + 2,180 lane meters of cargo + 150 cars
Baleària’s has already done some pioneering work by converting one auxiliary engine on ABEL MATUTES into an LNG engine. The company has the intention to re-motorize other ships in the fleet.

Will a first agreement with the unions allow La Naval to build the Baleària ferry?

The bankrupt Spanish shipyard La Naval has reached a principle of an agreement with the unions. One of the points is to let go the unfinished dual-fuel multipurpose vessel LIVING STONE, built for the Belgian-Dutch DEME Group. This company recently tried to tow the ship out of the shipyard, to avoid it to be blocked by the bankruptcy. The action, described by local newspapers as an act of piracy, was unsuccessful. The owners defended themselves, saying that they have already paid a lot for the vessel, and claim its property.
Now La Naval and DEME have agreed to move the vessel to a place in the port of Bilbao, where subcontracting companies can finish it.
Although the unions have repeatedly shown their opposition to the ship leaving the shipyard, they had to admit that a full confrontation would mean the final curtain for the yard. DEME has agreed to pay the remaining invoices, which will help the yard to pay the salaries until the end of the year.
This agreement still needs to be signed by the unions.

The next step will be to solve the problem of the ferry commissioned by Baleària. The ferry company could exercise its right to cancel the newbuilding contract.
To be followed.