Brittany Ferries has announced that it is to move its Ireland/Spain sailings from Cork to Rosslare Europort, with the first sailing due to take place on 28 February.

“This was not a decision we took lightly and follows extensive consultation with our freight customers who sought better road connections and reduced driving distances,” said Christophe Mathieu Brittany Ferries CEO. “We opened the route in 2018 with a two-year trial window. While passenger numbers have been encouraging, the reality is that freight numbers, which are key to route viability, were not sufficiently robust.  However I want to make it clear that we remain committed to Cork, with our flagship PONT-AVEN cruise-ferry service to Roscoff.”

The Cork-Santander route which was launched in 2018 was primarily aimed at the freight market into Europe although it also carried holidaymakers, with an ‘économie’ no-frills onboard experience. The new route out of Rosslare will again concentrate on freight with an option for holidaymakers.

The consensus among hauliers is that Rosslare, with its proximity to Dublin and the east coast road network, is a preferred option.  Equally hauliers operating on the European mainland noted that Bilbao is more attuned to freight traffic and has easier transport links into Europe.

As with the current Cork-Santander sailings, the new Rosslare-Bilbao sailing will be twice-weekly and will incorporate a weekly Ireland/France rotation.

Delcomar Welcomes the Double-Ended ferry I. MADDALENA in Fleet

She was acquired last summer in Greece, where was deployed as ARIS III by Nea Psara on the maritime link between Oropos and Eretria and between Perama and Paloukia.

The vessel was built in 2010 by Karagiorgas shipyard and has capacity for 600 passengers, 105 cars and 20 trailers.

The investment for Delcomar was around EUR 6 million and the ship is now active on the La Maddalena – Palau routes in Sardinia.

Franco Del Giudice, chairman of Delcomar, commented the new entry in the fleet highlighting that “I. MADDALENA is the most modern ship deployed on the short sea routes in Italy”.

Corsica Linea and La Méridionale have finally agreed to join forces for the public service contract for maritime services between Marseille and Corsica, from 1 January 2021 till 31 December 2027.

Right on time, because the deadline was 14 February 2020.

In this common project, Corsica Linea would have an exclusivity for the port of Bastia (source: Le Journal de la Marine Marchande). Remember, before, La Méridionale used to operate ropax PIANA on this route.

Since 10 January a strike is immobilising all Marseille – Corsica ferry operations. The unions want to have guarantees for jobs at La Méridionale, and they want the ships to be able to sail on the two main routes, Ajaccio and Bastia. The strike is also related to the countrywide protest against Macron’s pension reform plan.

From what we understand, this year’s public service contract, which runs until 31 December 2020, will be divided in two periods, from now until end of April, and from May until the end of the year. For the second part a new tender will be issued.

After buying BARBARA KRAHULIK from Onorato Armatori, TT-Line sent the vessel to Remontowa Shiprepair for some rebuilding. She emerged as MARCO POLO, with a higher passenger capacity. She has 78 cabins and 30 reclining seats for 215 passengers. A panorama lounge has been added, as well as a scrubber.

MARCO POLO was in Klaipeda for the first time on 24 January 2020.

Liberty Lines will again offer a fast-ferry line between Otranto and Corfu during next summer, according to local media. The regular maritime link will be served with the high-speed craft AMMARI built by Liberty Shipyard in 2015.

Transit time will be 2 hours and 45 minutes.

The line will be active from 27 June to 6 September, with five weekly connections, except for the high season period from 27 July to 30 August when departures will be six a week in both directions.

From the Greek island, there will be connections to Paxos and Saranda, Albania, offered respectively by Joy Cruises and Ionian Seaways.

The Otranto – Corfu route was first offered by Liberty Lines in the summer of 2017 but was suspended the following year.

P&O Ferries released the first official images of the new €260 million super-ferries (although some were already published in FSN earlier via Chinese sources).

The largest ships ever to sail between Dover and Calais, the first of the 230-metre super-ferries will be operational by 2023.

What is important to remember?

The order was announced in September 2019.

Danish OSK-ShipTech is the designer [link to OSK ShipTech website] 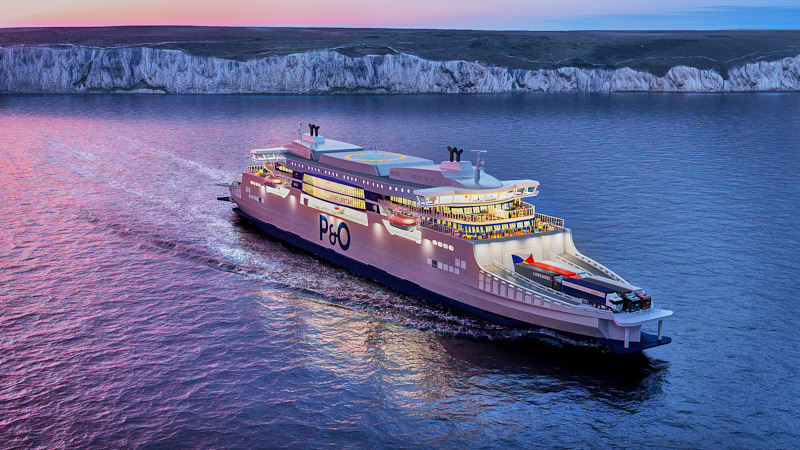 Austal to Build HSC for SGTM

Austal Limited has been awarded a A$15.5 million (US$10.7 million) contract for a 41m high-speed catamaran. The vessel will provide production continuity to Austal Vietnam as it completes the fabrication of a 94m ferry for a customer in Trinidad and Tobago.

The new vessel is based on an existing and proven Austal Australia designed vessel, with customer defined design modifications to be undertaken in Vietnam before construction commences there by March, 2020 with delivery approximately one year later.

The Passenger Express 41 catamaran can accommodate 400 passengers and mixed cargo of up to 20 tonnes, loaded via two ramps.

On 7 June 2012, she ran aground on the island of Metopi and was declared a total loss.

The fire onboard her sister FLYING DOLPHIN XVIII (May 2019) gave her a new lease of life. The ship was totally stripped and fully modernized internally and externally, while her machinery (MTU) was completely overhauled.

The ship is expected to be introduced on the Piraeus – Saronic Gulf islands as from Easter. 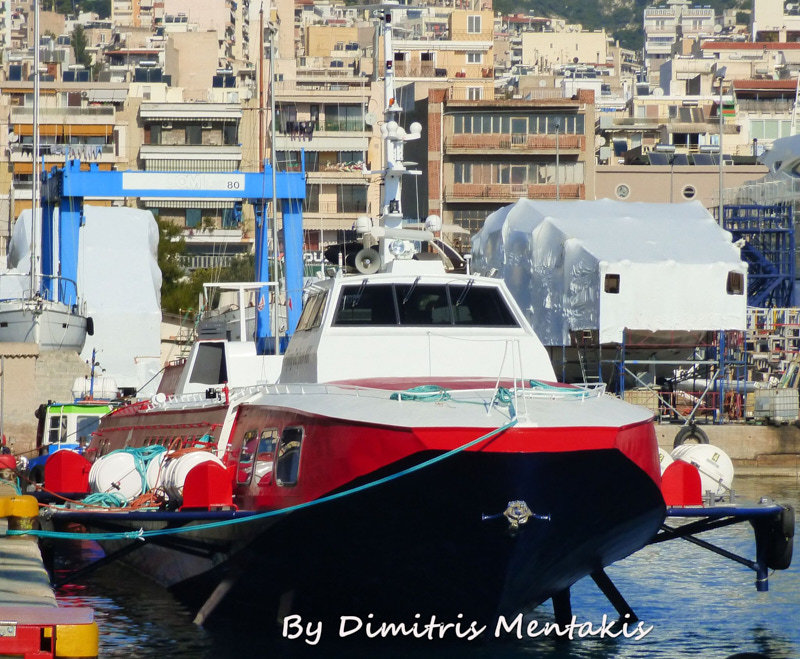 Is Minoan Lines Going to Restructure Its Fleet on the Crete Ferry Services?

KNOSSOS PALACE [link: Fakta om Fartyg] would leave the Heraklion line, after 20 years of service. She will probably be introduced –under Grimaldi colours– on the Civitavecchia – Olbia line.

FESTOS PALACE [link: Fakta om Fartyg] is expected to be renamed KYDON PALACE and she will be transferred to the Piraeus – Chania line.

Of course, all this has to be officially confirmed. 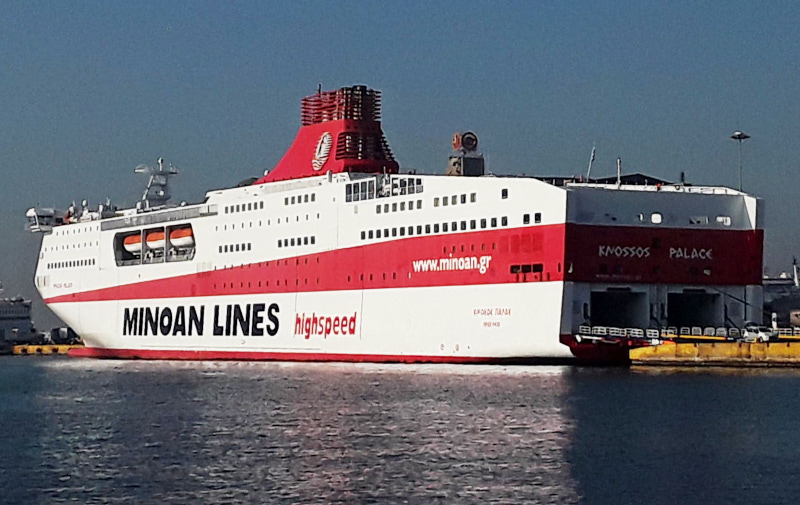 Brexit Affected Port of Calais and the Channel Tunnel

Port of Calais had a turbulent year 2019, with the following reasons: