Especially Q2 was extremely challenging, with almost no passenger traffic and the slowdown in global trade caused by the global pandemic.

Finnline is essential for the supply of island-like Finland. The company says that it transports more than one third of the roughly one million trucks moving over the three main sea bridges, Finland–Estonia, Finland–Sweden and Finland–Germany, which are connecting Finland to the rest of Europe.

During H1, Finnlines operated on average 19 vessels in its own traffic. The cargo volumes totalled approximately 357k (386k) cargo units, 60k (88k) cars (not including passengers’ cars) and 522k (581k) tons of freight not possible to measure in units.

In addition, some 227k (310k) private and commercial passengers were transported.

Finnlines has been following closely all the emergency measures to shipping companies, and aims for fair conditions of competition. 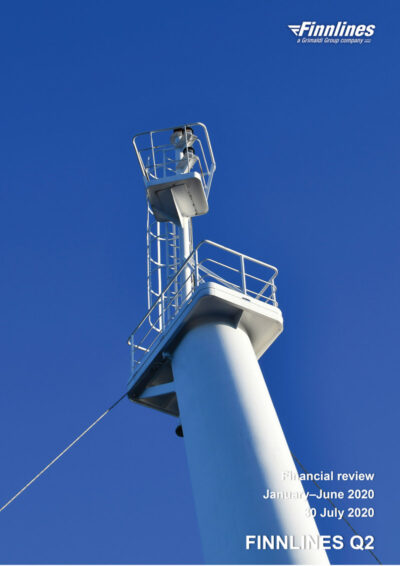 Due to a steady recovery in freight volumes on the North Sea during the last weeks, roro ships HATCHE and STENA FORERUNNER will return to commercial service on the Stena Line freight routes Europoort – Killingholme and Europoort – Harwich, respectively. 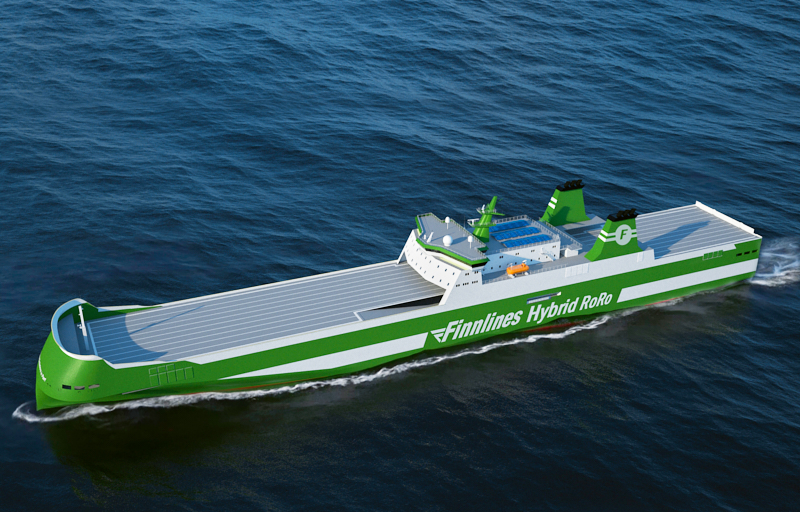 The Construction Of Finnlines’ Newest Vessel To Start

The construction of Finnlines’ newest environmentally friendly ro-ro vessel was started on 8 June 2020, with the steel cutting in the Chinese Nanjing Jinling shipyard.

The first ro-ro vessel is expected to start operation as early as next year, and the other two in 2022.

In addition to this, Finnlines has also ordered two giant Superstar vessels, which will be pioneer in honouring green values. The total investment including five new vessels is EUR 500 million. The first steel plates are being cut in the traditional steel cutting ceremony.

The National Emergency Supply Agency (NESA) in Finland is prepared to spend EUR 45 million on financial support to ensure the transport of vital cargo from Finland to Sweden, Baltic countries and Continental Europe.

Finnlines welcomes this decision and published a press release to draw attention on the importance of the company as a lifeline maritime connection.

NESA has already granted financial support to four out of seven commercial operators securing the main maritime bridges for rubber-tyred vehicles. The first support actions taken by NESA where addressed to ropax operators whose operations are not viable without revenue from recreational travellers. For more freight-oriented operators, the threat of serious disturbances was less imminent. However, the corona crisis is having a strong impact in Finland’s economy and the value added of the transport sector is estimated to fall by around 20%, to which Finnlines is also exposed to.

After several weeks of negotiations and encouraged by NESA, Finnlines has also filed an application under this same emergency financial support programme.

A member of the Grimaldi family, Finnlines repeats its mantra: “Companies that operate in the same sector and compete with each other should have uniform and equal opportunities to apply for and receive financial aid granted by the State and authorities. Non-discrimination and ensuring fair conditions of competition are the basic principles of EU State aid rules.”

“Operationally the quarter ended in difficult conditions, with a strong impact on passenger transport and a slowed down growth in business globally. Finnlines is not immune to this slowdown in global trade and we also need to mitigate the Covid-19 impact. Thus, we have taken steps to lower costs and have implemented cost-saving plan,” said CEO Mr Grimaldi in a news release.

“Governments across Europe have promised various emergency measures to shipping companies. This can lead to very unfair competition. Any financial aid has to be provided in accordance with existing rules, and that individual companies should not be singled out for support at the expense of more robust rivals. Any aid, either from governmental or from security of supply agencies, should be available to all shipping companies, regardless of their financial strength, in order to avoid distorting the marketplace and risking antitrust complaints. If the state intervenes, it has to intervene in a such way that it does not create unfair competition.”

Finland will start to restrict travelling to Finland as from 19 March 2020 midnight. These limitations remain in force until 13 April 2020.

Finnlines will do their best to ensure that people have the possibility to get home and undertake essential travel:

Finnish citizens and people living in Finland can return to Finland. Note, that the travellers should stay at their homes 14 days after returning home.

Foreign travellers in Finland can return to their home countries.

EU citizens are allowed to return via Finland to their home countries.

Cargo transportation will continue as usual and drivers will be transported normally since essential traveling for work is allowed.

At the end of last year Finnlines announced that it signed an order for two Superstar ro-pax vessels from China Merchants Jinling Shipyard (Weihai). Renderings from Knud E. Hansen have now been released.

They will be larger than the existing Star class vessels and will be Finnlines’ flagships both in terms of size and technology. With a length of about 230 metres, their loading capacity will be for 5,100 lane metres for rolling freight and around 1,100 passengers.

The press release says that “the vessels will have the highest Finnish / Swedish ice class and will be built with the top technical and environmental views in mind, while being pioneers in honouring green values.”

The hybrid newbuilds will operate on the Kapellskär – Långnäs – Naantali route. A large duty-free supermarket will be the center of the ship.

They are expected to be delivered by 2023.

Grimaldi Group has chosen the Chinese shipyard Avic Weihai for the construction a pair of Superstar Class ferries due to be operated by Finnlines.

This is the first time the Grimaldi Group will build ropax ferries in Asia. The other shortlisted yards were Hyundai Mipo, Jinling and Guangzhou Shipyard International in China.

All the European shipyards has been left out since the price were in some cases twice as high.

For the first time in its history, the Grimaldi Group will build ropax ferries in Asia. The order for the new ‘Super Star’ class for Finnlines seems to be very close, according to what Emanuele Grimaldi stated at the EuroMed Convention. “We are now discussing with only three shipyards. The deal can be done in one month.”

The new ice-class vessels are an evolution of the Fincantieri-built Star-Class vessels. They will have a capacity of some 5,000 lanemetres and 350 cabins. They will also have the biggest battery pack ever mounted on a ship.

Some sources revealed to Ferry Shipping News that the builders shortlisted are Hyundai Mipo in South-Korea, Avic, Jinling (both part of the China Merchants group) and Guangzhou Shipyard International in China. All the European shipyards has been left out since the price were in some cases twice as high. Chinese yards seem to have an advantage over the South Korean competitor.

In the near future Grimaldi Group will also order a new series of ‘Supercruise vessels’ for the Mediterranean network, designed “to halve consumption while doubling capacity”.

In Q1, Finnlines realised a good result despite the fact that the growth of Finnish exports and imports has slowed down. 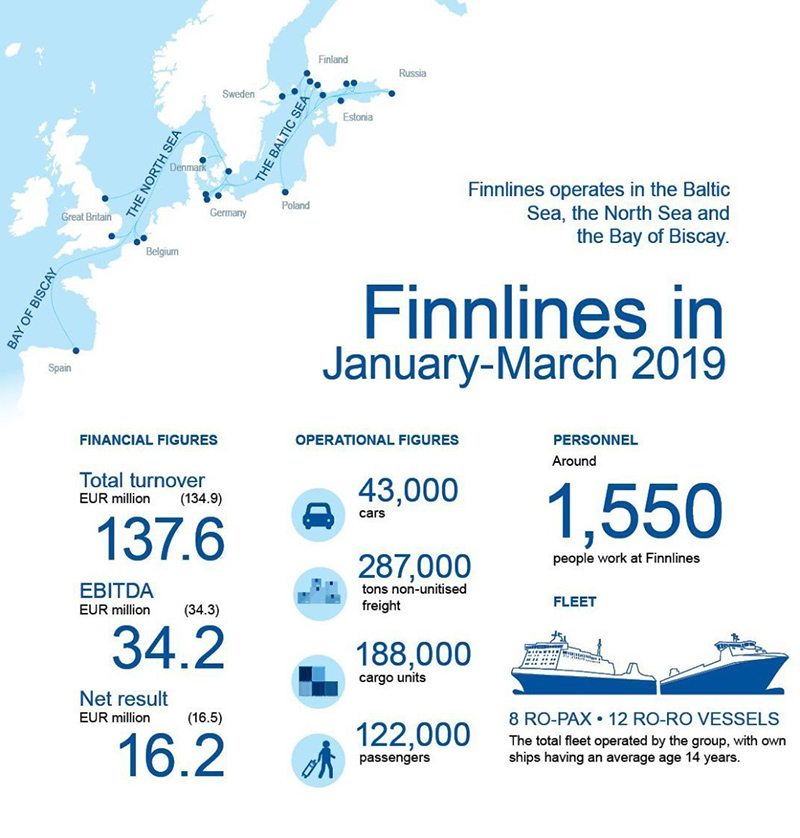