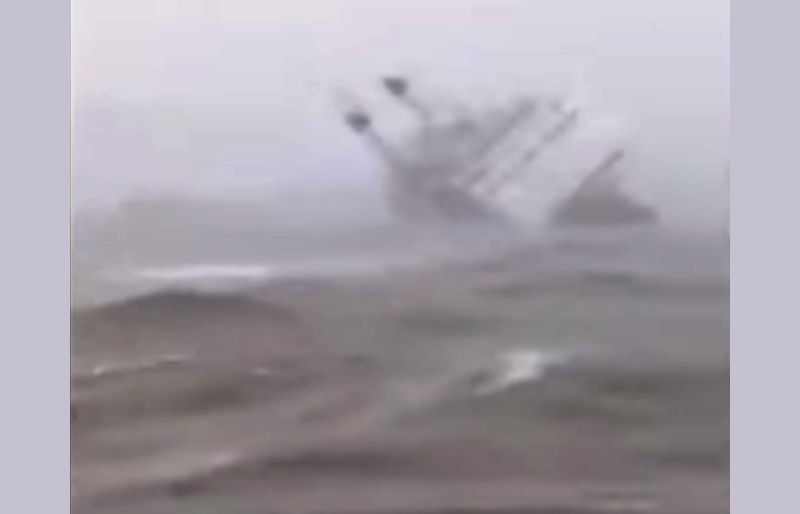 Perhaps you asked yourself who we are? What better way than having a picture taken in front of a ferry?
The entire Ferry Shipping Summit team is ready for you, and wishes you a very enjoyable read of this Ferry Shipping News. 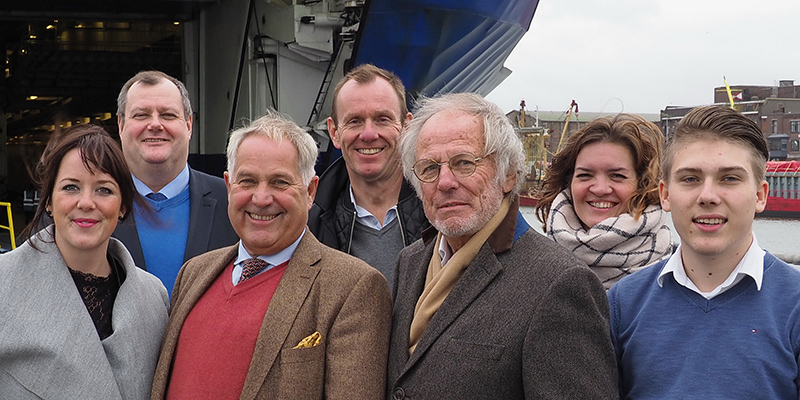 The SMA (Swedish Maritime Administration) will introduce a new fee system for its fairway dues and pilot fees. It is the intention of the SMA to implement this new system on 1 January 2018.
Two of the taxation components are the passenger and cargo fees, which affect the ferry industry.
To see the full explanation about the fees, click on the link below.
Finnish politicians and ferry owners, such as Viking Line, have protested. The new system means, in short, that the more passengers and the more freight a ship carries, and the more often it arrives at a Swedish port, the more expensive it will be for the operator. 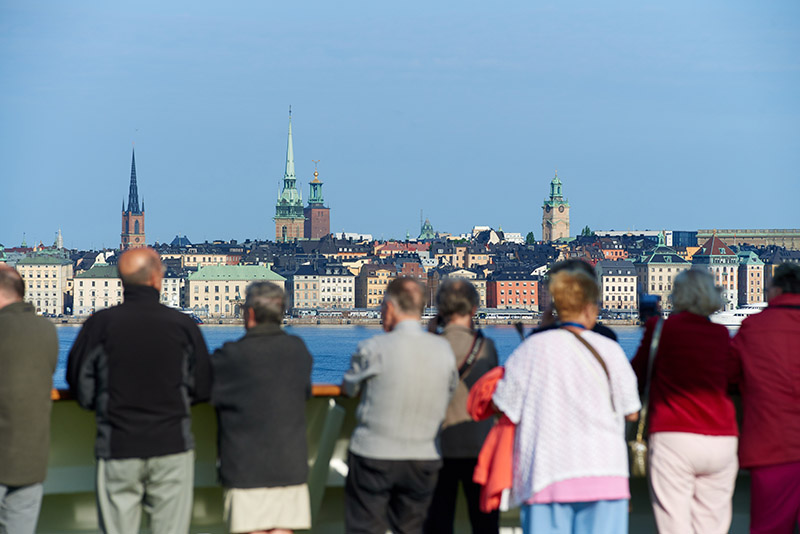 Link to the SMA (in English)
0

Wärtsilä will supply the engines, the navigation system, and a broad scope of other products and systems for the environmentally friendly cruise ferry being built for Viking Line. The ship is being built at the Xiamen Shipbuilding Industry yard in China and there is an option for a second vessel.
Commencing in early 2021, the new vessel will operate between Turku and Stockholm. The ship is the first LNG fuelled ferry of this size and standard to be built in China.

The French port of Toulon has again seen a significant rise in freight traffic from Turkish operator UN RoRo. The last twelve months have seen a rise of 9.7% of freight (= 66,345 units). The nine first months of 2017 have even been better, with an increase of 13% to 14%.
Ships sail almost full at 90% of their capacity, both inwards and outwards.
In the beginning of this year one the vessels –UN AKDENIZ– was reintroduced after lengthening. YouTube link
A second vessel will be lengthened soon.

Toulon is strongly associated with Corsica Sardinia Ferries, with here as well an excellent twelve months. The ferries transported more than 1.5 million passengers, an increase of 6.4%.
The new line to Sardinia was good for some 100,000 passengers. Next year Corsica Ferries will open a new route to Mallorca.
Moby Lines could return in 2019, for a link with Bastia (which will be operated out of Nice in 2018).
Freight to and from the island of Corsica has gone down, which can be explained by the competition of Corsica Linea from Marseille. 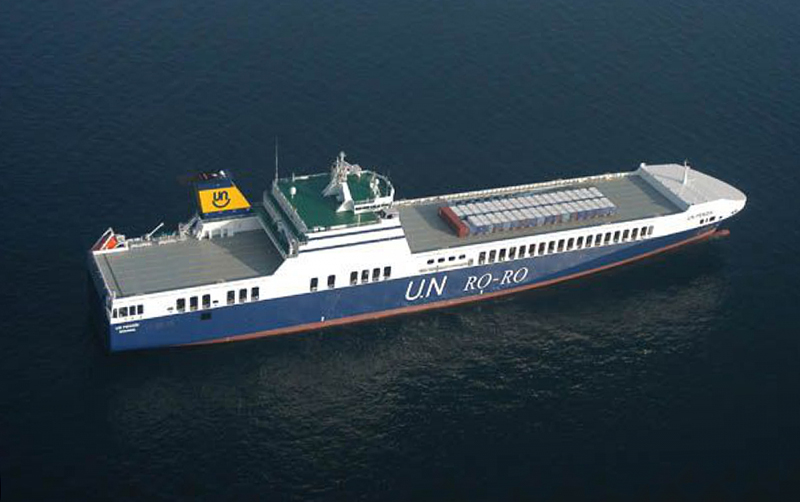 Wyker Dampfschiffs-Reederei Föhr-Amrum GmbH (W.D.R.) and Dutch shipyard Talsma have signed the contract for the construction of a 34m passenger-only catamaran.
She will enter service in spring 2019 and expand the existing WDR conventional ferry offer to passengers without cars.
The aluminium vessel has been designed by Conoship from Groningen, and can accommodate around 150 passengers in winter and 250 in summer.
The challenge was to find a suitable vessel that has the best performance within the speed regulation parameters in the protected Wadden Sea. Her maximum speed will be 20 knots, which against the current will still allow her to reach 16 knots. 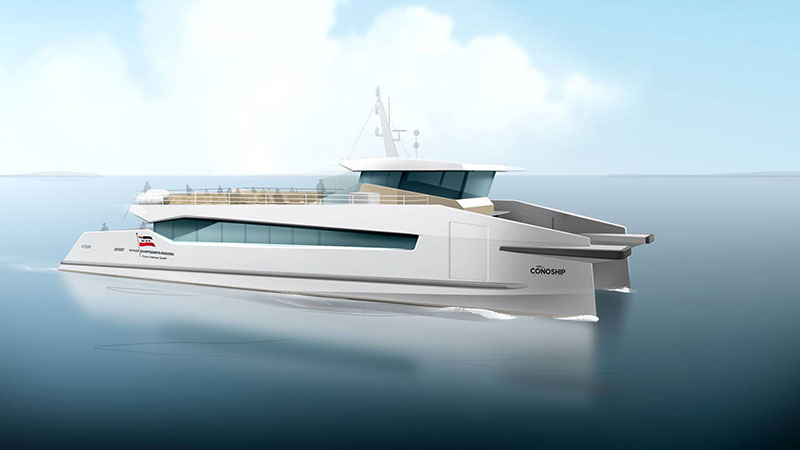 The fight for the ownership of Hellenic Seaways (HSW) is over. Attica Holdings and Grimaldi Group have reached an agreement on October 26, where HSW will be almost fully owned by Attica

This deal is the most logic solution for the control over HSW, where two competitors basically both owned half of the company, with Attica at a small advantage. There was only one way: either Grimaldi, or Attica had to become the sole owner. Now that Attica fully controls HSW, it will certainly create a high degree of rationalization on the Greek domestic routes. Attica/HSW will have the Aegean, and Grimaldi Group will –via Minoan Lines– have the Crete routes to Piraeus and Santorini / Cyclades. Grimaldi gets money to invest, and gets two modern ships.

Attica/HSW will now be able to reshuffle ships and routes for a better utilization. This economy of scale will be something attractive for investors. The domestic horizon will change, for sure.
It is noteworthy to remember that Attica also has a cooperation with ANEK Lines, on Crete (Heraklion and Chania, the headquarters of ANEK) and in the Adriatic. Could this cooperation develop further? Time will tell.

Part of the deal is the sale of the SUPERFAST XII to a company within the Grimaldi Group. This ro-pax was built in 2002 bij Flender Werft, Lübeck.

Caledonian Maritime Assets Ltd (CMAL) has published the annual report for the year ending on 31 March 2017. CMAL owns the ferries, ports, and infrastructure necessary for vital ferry services serving the West Coast of Scotland and the Clyde Estuary, and is fully owned by the Scottish Government.
In his foreword, Chairman Erik Østergaard sums up the following highlights A ferry connection between Turku and St. Petersburg?

The Finnish management of Port of Turku paid a visit to St Petersburg at the beginning of October. This happened within the framework of cooperation between PP SPb MF (Passenger Port St Petersburg Marine Façade) and Port of Turku. A Memorandum of Understanding has been signed in July. The aim is, amongst others, to improve the attractiveness of cruise and ferry tourism, and to create the most comfortable environment for passengers of cruise and ferry vessels, representatives of cruise and ferry lines and tour operators.
Moreover, the companies said they intend to develop a joint initiative on attracting operators of cruise lines and ferry lines in order to organize regular international ferry connection between the two ports.
The Finnish group included Sales Director Nirhamo Jaakko, Vice-Chairman of the Board Raaska Petja and Business Development Manager Anstead Paula.