At the end of last year Finnlines announced that it signed an order for two Superstar ro-pax vessels from China Merchants Jinling Shipyard (Weihai). Renderings from Knud E. Hansen have now been released.

They will be larger than the existing Star class vessels and will be Finnlines’ flagships both in terms of size and technology. With a length of about 230 metres, their loading capacity will be for 5,100 lane metres for rolling freight and around 1,100 passengers.

The press release says that “the vessels will have the highest Finnish / Swedish ice class and will be built with the top technical and environmental views in mind, while being pioneers in honouring green values.”

The hybrid newbuilds will operate on the Kapellskär – Långnäs – Naantali route. A large duty-free supermarket will be the center of the ship.

They are expected to be delivered by 2023. 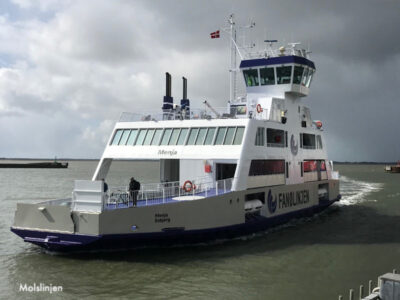 The Municipality of Fanø and the owners of the Fanølinjen – Molslinjen –,  have agreed to phase out the ferry SØNDERHO [link: Marinetraffic] and to start the construction of a brand new electric ferry.

A new ferry is badly needed.

The new hybrid battery-powered ferry will be built at the Danish Hvide Sande Shipyard [external link]. It will be in service in late summer 2021.

Converting the existing ferries FENJA and MENJA to electric operation is also being studied.

The vessel is the seventh sister ship part of a series of units built at the German shipyard Flensburger-Schiffbau-Gesellschaft.

Last summer she was rumoured to be bound for MOBY group. Moby already operates the sixth and the fifth sister units. They are bareboat chartered and operate as MARIA GRAZIA ONORATO and ALF POLLAK.

LEEVSTEN is expected to reach the port of Rhades, in Tunisia, on the 10th of January.

Some brokers sources report to Ferry Shipping News that the time charter terms with CTN are for 6 or 12 months at a daily rate of €15,000.

TT-Line Increases the Frequency to the Baltic States 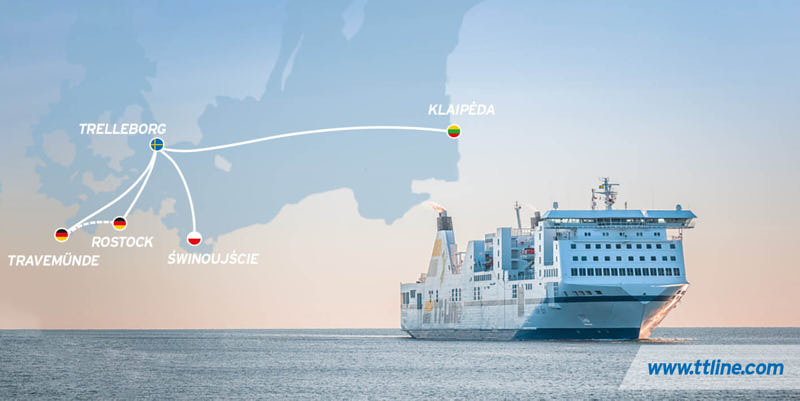 TT-Line will expand the route between their Swedish hub in Trelleborg and Klaipeda (Lithuania), with up to five departures a week.

The ships will berth at a new, modern ferry terminal in Klaipeda, to be used exclusively by TT-Line. The freight will no longer have to pass the Klaipeda city centre, which will give a faster access to the road network in Lithuania. 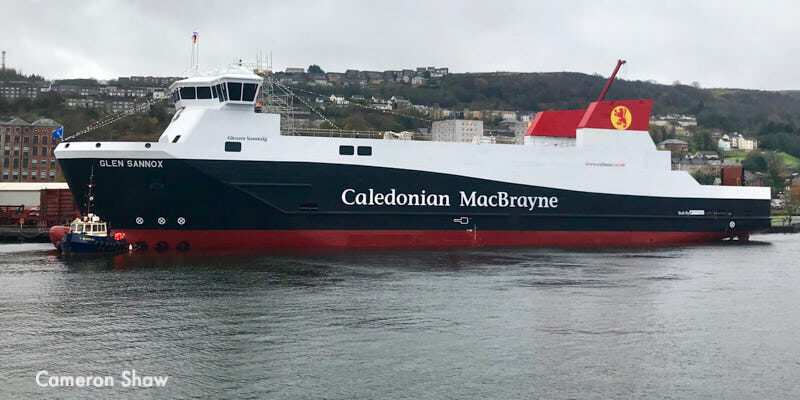 Economy Secretary Derek Mackay has given an update to Parliament on the Ferguson Marine shipyard which has now been taken into public ownership. Two ships are ‘under construction’ for domestic Scottish CMAL routes.

The additional cost to complete the two ferries is now estimated to be between £94.8 million to £98.8 million which includes the management and operation costs of the yard.

The estimated delivery window for GLEN SANNOX, which will operate on the Ardrossan to Brodick route, is October to December 2021.

The second vessel, which will operate on the Uig to Tarbert and Lochmaddy route, is expected between July and October 2022.

The contract for the vessels had an original value of £97 million with anticipated delivery of mid-2018.

A confidential (but public) report [external link to the 44-page report] notes that the ferries are at risk of being overweight and that the first ship is expected to be below contract speed when delivered. 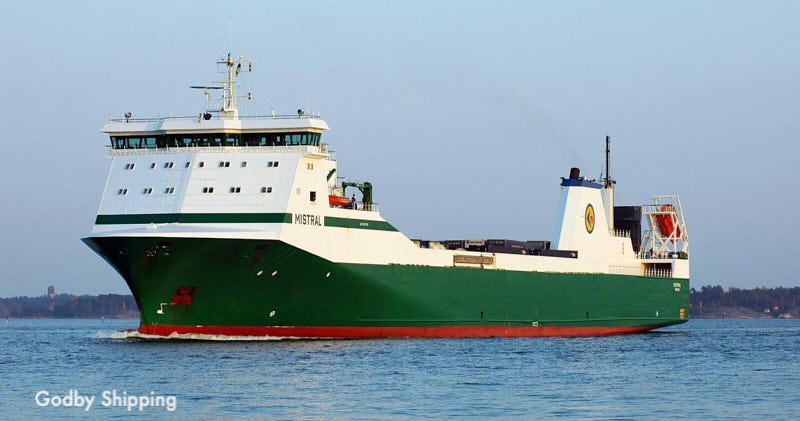 She will be employed on the Huelva-Tenerife-Las Palmas service for Canary Bridge Seaways, a joint venture between Fred Olsen and Balearia. 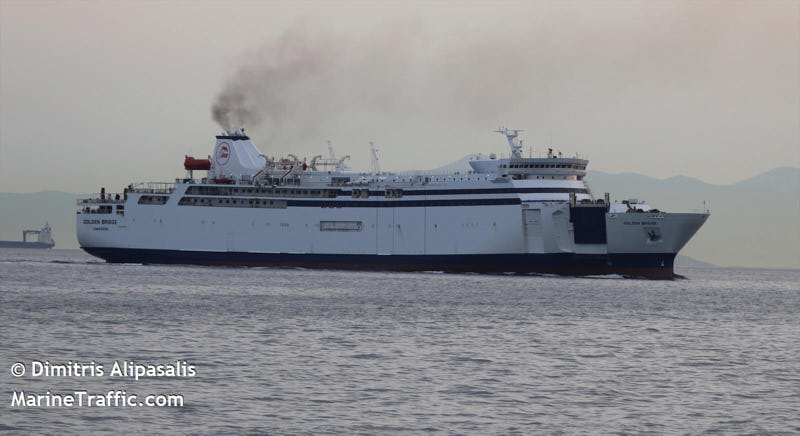 After a six-month period, FRS has decided not to extent the charter of the A-SHIPS Management’s GOLDEN BRIDGE.

The ship will soon return back to Greece. She will be temporarily replaced by Transmediterranean’s VRONSKIY on the Motril – Melilla line.

The Japanese-build vessel was chartered to FRS Iberia on April 2019 and entered service on the Motril – Melilla run on June 2019, after having completed successfully all the proper inspections. 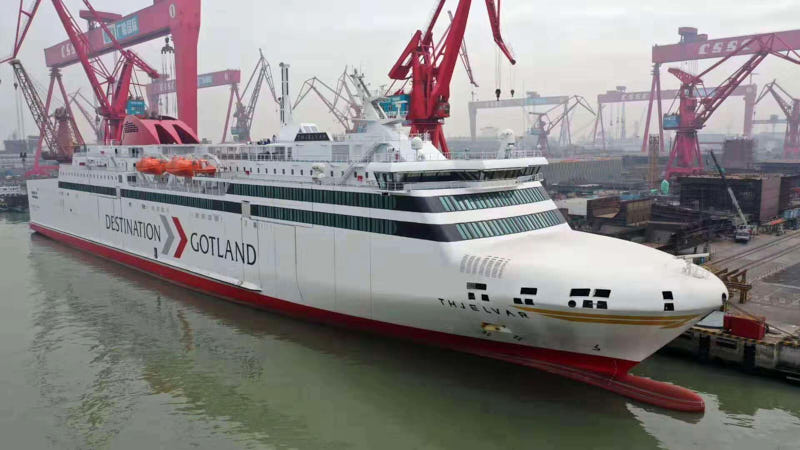 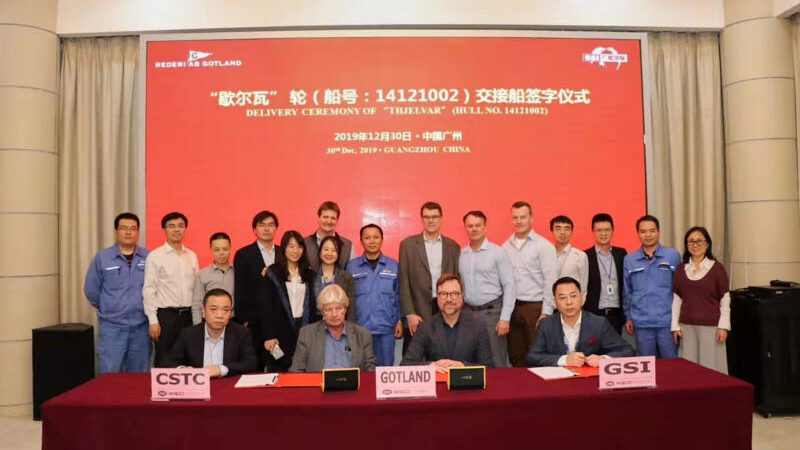 On 30 December 2019, Destination Gotland signed the papers to become the owner of the second LNG-ferry built at the Chinese GSI yard. She’s the sister of VISBORG.

The 2019 volumes were greatly affected by a 3-week absence of ferry WASA EXPRESS, and the Finnish postal strike.