As of 5 November 2022, roro ship SHIPPER will be added to the route jointly operated by Fred. Olsen and Baleària. (Between the Iberian Peninsula and the Canary Islands).

The new service is a response to the increase in two types of cargo:
To the Iberian Peninsula: perishable products
To the Canary Islands: in freight transport during the Christmas period
The new service will be added to the two departures made by ropax MARIE CURIE to date, so carriers will have 3 weekly departures.
SHIPPER will depart from Las Palmas de Gran Canaria on Tuesdays at 8:00 p.m. and from Huelva on Saturdays at 8:00 a.m.
The connection with other islands will be done with the fast ferries of Fred. Olsen.

She was built in 2004 and ran on the Costa Brava as the DOFI JET CUATRE.

The BONANZA EXPRESS, part of the Fred Olsen fleet since 1999, was the first high speed acquired by Fred.Olsen Express and also the first ever to sail in the waters surrounding the Canary Islands.

The unknown buyer would be a newcomer on the Malta-Italy market. 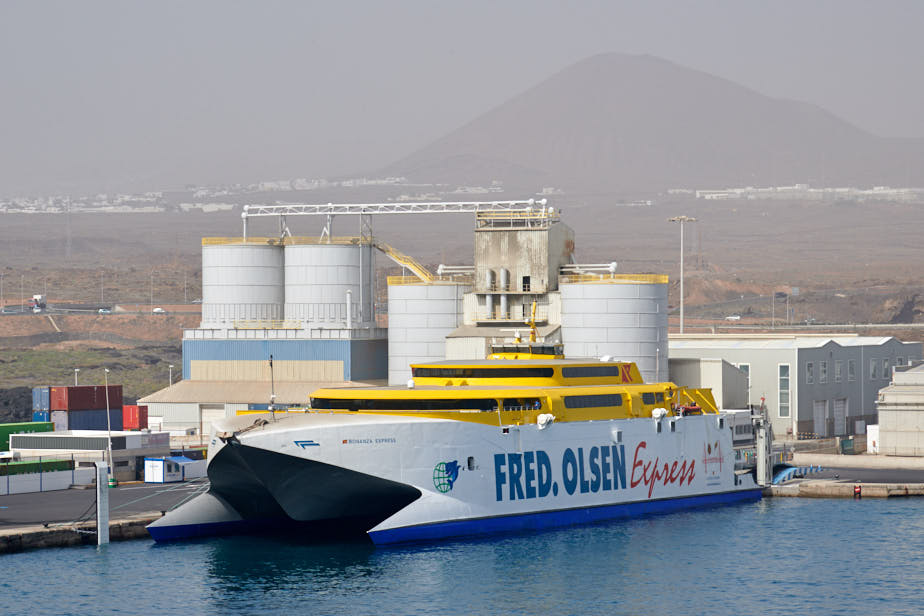 The Court of Justice of the European Union issued a resolution dismissing the appeal filed by Fred Olsen.

What is it about? In March 2018, the General Court of the European Union considered that Fred Olsen’s exclusive commercial exploitation of Port of Agaete (Gran Canaria) was a state aid, granted by the Government of the Canary.

Fred Olsen and the Government of the Canary Islands argued that the exclusive use does not constitute State aid, since Fred Olsen had to pay port fees.

However, both the General Court and the Court of Justice have rejected this. They pointed out in their judicial decisions that the payment of port taxes does not cover the exclusive use of a public port.  The Government of the Canary Islands should have demanded a higher price for an exclusive use.

In the past, both Naviera Armas and Trasmediterranea have tried –in vain—to get access

This ruling should mean the end of the exclusive use of the Port of Agaete by Fred Olsen.

The shipping companies Baleària and Fred. Olsen Express will incorporate the first ferry powered by dual gas engines on the routes that operate between Huelva and the Canary Islands, starting next Sunday March 24, at the departure of 20h from the port of Huelva.

The ro-pax NAPOLES has returned from the shipyard in Gibraltar after having received a new dual-fuel LNG engine.
She will replace the MARTIN I SOLER.

The remotorising of the ferry has been an important piece of engineering, with a price tag of EUR 12.5 million.

On the other hand, technological innovations have been made on the ship to turn it into a ‘smart ship’. Among the main novelties are, the digitalisation of all the signage, as well as the access to the staterooms by means of a QR code that customers receive on their mobile phone (and which prevents them from having to go through reception), and digital entertainment on demand.

Austal is to design and build two 117m high-speed vehicle passenger trimaran ferries for Fred Olsen S.A. The contract is worth €126m.
The aluminium high-speed ferries, designed by Austal Australia, will be the second and third trimarans to be delivered to Fred Olsen S.A. who already operate the world’s first and largest trimaran, the BENCHIJIGUA EXPRESS (Austal, 2005).
The new trimarans will be capable of transporting over 1,100 passengers and up to 276 cars at speeds of up to 38 knots, with both commencing construction in 2018.