The Port of Ancona is centrally positioned in the Adriatic region and handles over one million passengers per year.
The local port authority entrusted the consultancy company Risposte Turismo with research work aimed at understanding the performance of the port with regard to ferry traffic, in particular from the point of view of volumes of demand acquired and handled, with the aim of investigating possible competition for traffic by sea or by air.

Desk analysis of the two sectors involved 23 ports and 13 airports which varied greatly in terms of passenger numbers (Rimini, Ancona, Bari, Verona, Pisa, Bologna, Venice, Bergamo, Milan Malpensa, Rome Fiumicino.
On the other side of the Adriatic Sea, the airports considered are Corfu, Dubrovnik, Split and Zadar. Flight passenger numbers in the area rose by 30% (1,4 to 1,9 million) in just three years.

According to the data collected and processed, in the last 10 years, the connecting air traffic between Italy and Croatia, Montenegro and Albania has gradually been on the rise: 800,000 passengers were transported in 2008 and 1,8 million in 2017. The most impressive flow is to and from Albania (almost 1,5 million units). 300,000 passengers are noted to and from Croatia. Ten major airlines have chosen the Adriatic area as a traffic operation zone.

One example of elaboration in this work is this map, which compares the available air and ferry connections to and from the city of Ancona. While there is only one air connection with Tirana, there are many sea routes. Many factors are compared with respect to the two forms of traffic, despite the fact that only five routes are directly comparable since they perfectly overlap. 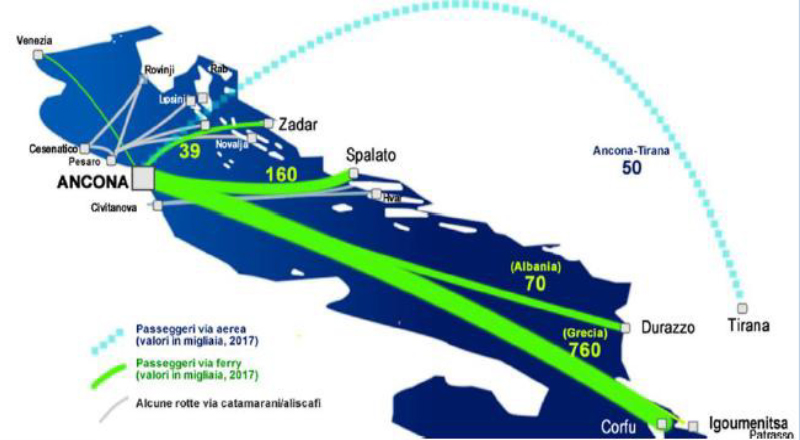