The HUFTARØY and SAMNØY, built by Tersan Shipyards in Turkey on behalf of Norwegian operator Torghatten Nord, are the first two ferries delivered by Redwise, burning LNG only.

Being able to provide two full LNG trained and certified crews at the same time, with proven experience on LNG fueled and double ended ferries, was the main decision driver.

Both Redwise crews had undergone extensive training at EU institutes for the previous LNG fueled delivery voyages. With the regulations and standards for low flashpoint fuels developing and being implemented further, it was decided to run an additional dedicated course at the STC training center in Rotterdam for basic and advanced training. This was necessary to comply with current Dutch and Norwegian legislation, partially doubling up previous training.

With vessels departing shortly after each other and with limited LNG only bunker capacity, Redwise entered into a frame agreement with REPSOL for these simultaneous voyages. REPSOL proved itself as extremely helpful and flexible setting up bunker facilities in both Cartagena and El Ferrol, on very short notices with the vessels bunkering LNG back-to-back.

The two voyages went smoothly, with the vessels averaging 16 knots following on each other’s heels. The delivery voyages were done in the best possible circumstances due to a large high-pressure system nestling above Europe. 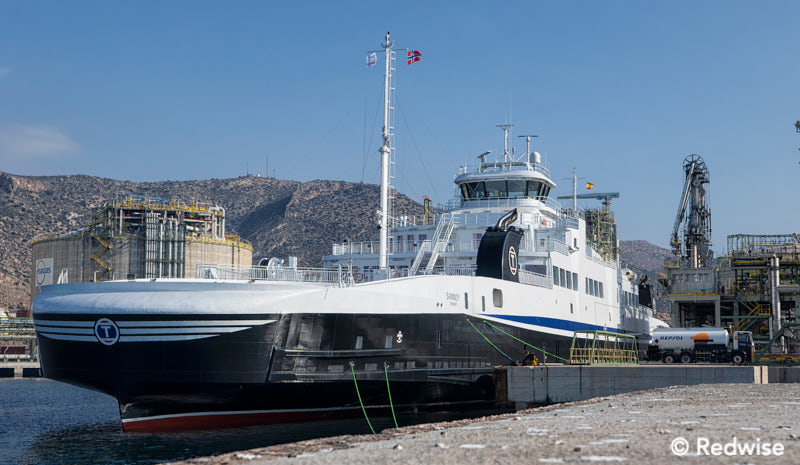 “BC Ferries Is On The Whole A Well-Run Company,” Says Report

The Review of Coastal Ferry Services confirms that the coastal ferry service is a vital part of the provincial economy and critical to both those who use ferry services and for the province as a whole.

BC Ferries President and CEO Mark Collins appreciates the review concluding that “BC Ferries is on the whole a well-run company.”

The review also recognizes that “employees and managers are committed to providing a safe, reliable service for the coast and work hard at it every day of the week” and “Board of Directors take seriously its obligation to provide good strategic direction and oversight.”

BC Ferries acknowledges and appreciates the financial contribution the Province made over the past year, along with contributions from BC Ferries, to fare affordability and helping to keep fares flat and lower fares on some routes.