The Isle of Man Ship Registry has been selected as the flag state to oversee construction of two rail-enabled ropax ferries that will connect New Zealand’s North and South Islands.

KiwiRail has commissioned the future-proofed vessels to modernise its fleet of ferries serving the Cook Strait. KiwiRail’s Interislander service connects New Zealand’s State Highway and national rail networks between the capital city Wellington in the North Island and Picton in the South Island. The Interislander carries approximately 850,000 passengers, 250,000 cars and up to NZ$14 billion worth of freight annually.

The search to find a preferred shipyard began last year when KiwiRail issued an Expression of Interest to international shipyards. The selection of a successful shipyard is due to be completed in the next few months. KiwiRail has now appointed the Isle of Man Ship Registry as the newbuilding Flag. The Isle of Man Ship Registry will appoint and work in partnership with KiwiRail’s chosen classification society, overseeing the build process once a shipyard has been confirmed.

The two 220m Ropax ferries, which are being designed by OSK-ShipTech, will each be capable of carrying about 1,900 passengers. They will also have a capacity of approximately 3,600 lane metres, allowing them to transport a combination of vehicles including up to 40 sixty-foot rail wagons.

The new ferries will trigger significant changes to the Wellington and Waitohi Picton waterfronts, including new ferry berths, terminals and both rail and road connections to ensure the benefits of the new ferries are fully realised. The ships are targeted to enter service in the mid-2020s, replacing the existing three-vessel Interislander fleet.

The vessels will be diesel electric hybrid power, with diesel generators and batteries providing electrical power for azimuth thruster propulsion. 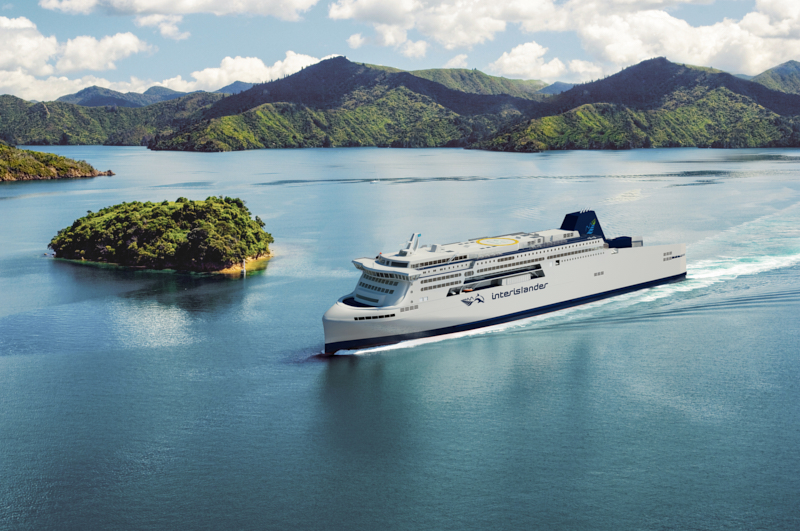