Full force ahead for Grimaldi Group

A new order for highly flexible roro ships to be signed by the summer, automotive sector facing difficulties, containers as a driving force, growing passenger figures, ports to be adapted to large ships, increasing consolidation, more quay space for those who handle traffics, the almost impossible dream of a reunion between Confitarma and Assarmatori, new technologies and his future role as president of the International Chamber of Shipping.

Mr Grimaldi, let’s start with an evaluation of the past year: was 2021 satisfactory for your group?

2021 was a very good year. We closed the year with good results and many savings. Although we do not have all the figures yet, I can say that the results were particularly good with regard to containers, and a bit less on the passenger side, even if was better than 2020.

In the automotive sector we did not achieve excellent results due to microchip shortages, which caused a slowdown in automotive production. Also, for this reason, we decided to charter-out 3 of the 10 recently delivered new car carriers to Far Eastern shipowners until 2023. The fixture will generate a profit of EUR 20 million. 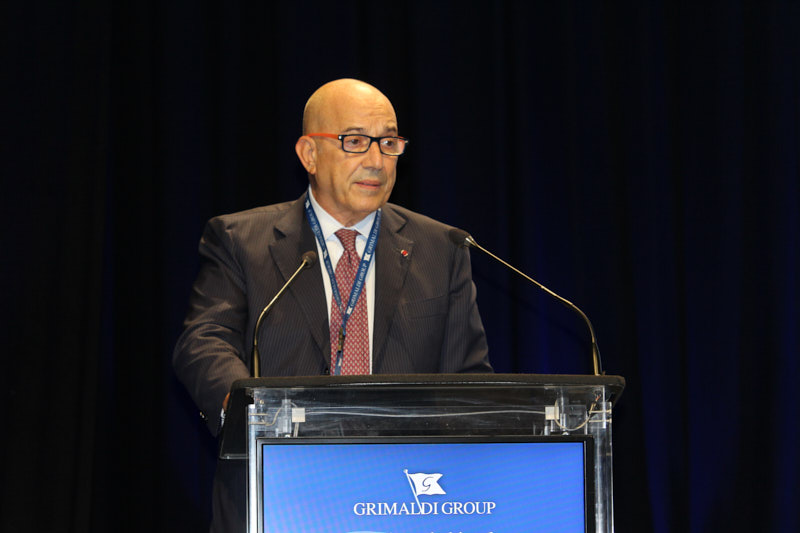 What do you expect from the current year?

I expect 2022 to be a very good year. Regarding passengers, Grimaldi Euromed achieved good results in 2019 (3 million pax). In 2020 results were bad (2 million) and in 2021 they were satisfactory (2.5 million). In 2022, I hope results will be good again. Our group transports approximately 4 million passengers per year.

At present we are witnessing a recovery as, in January alone, bookings for next summer increased by 40% compared to the first month of 2021.

In 2020, our automotive business did not perform well, but in 2021 there was a recovery. As concerns motorways of the sea, in our order book we still have 6 roro ships under construction in China, as well as 6 conro multipurpose units ordered in South Korea and two ferries for Finnlines.

Your next order will be for car carriers: is the time ripe?

Our upcoming new project will involve 5 highly flexible roro/car carrier units with a load capacity of 8/9,000 lane meters each. We will sign the new order by next summer. It took us slightly longer because we wanted to improve our project, and the investment will amount to at least 70 million dollars per vessel.

We devoted a few more months to research and development because our future depends on new technologies. This new series of ships will be able to transport ordinary rolling cargoes as well as trains, project cargoes, heavy parts etc…, and they will be deployed mainly on the route between North America, Northern Europe and the Mediterranean, but also for trades with West Africa and South America.

Will your newbuildings be actually ammonia-ready as you announced during the latest Euromed Convention?

Definitely, if ammonia were produced in a clean way. But at present this is impossible. The next newbuildings will consume 50% less compared to the previous series and we will build ships which produce less emissions thanks to hydrodynamic solutions, reduced energy consumption, digitalization, optimization of routes and other special actions.

Don’t you think that very large ships are posing greater challenges than expected for your group?

The deployment of large ships always requires onshore infrastructure adaptations. It is part of the progress. This is exactly what happened also for container ships. As concerns the adaptation of draughts, quays and yards, ports are slow to implement and carry out the necessary upgrades. Some general cargo terminals are no longer needed and port authority presidents should reward those who handle more traffics. Very often, terminals remain focused on general freight traffics which have now become marginal. Nowadays “big is beautiful”, while the emphasis on small businesses is no longer relevant.

Both in the shipping and in the automotive sector there was a significant consolidation of trademarks, which are still merging. The world is growing, and it no longer see things from a national perspective, rather it only has a global perspective.

You are about to be appointed as President of the International Shipping Council, what do you expect for your term of office?

I was appointed president last year and next June I will probably be confirmed for presidency. In the upcoming years the shipping sector will have to change all ship engines. This extraordinary time in history for maritime transport is comparable to the propulsion shift from sail to engine. I am glad to be at the helm of the International Shipping Council and I regard this opportunity as a privilege. It is both a great challenge and a big responsibility.